A discussion on the figure of Alen Divis was organised as one of the accompanying programmes to Divis’s retrospective exhibition (Rudolfinum Gallery, Prague, 10 February–24 April 2005).

A discussion meeting on the figure of Alen Divis was organised by the VVP AVU in Prague in co-operation with the Rudolfinum Gallery as one of the accompanying programmes to Divis’s retrospective exhibition with aim to face the “myth about the artist” with the reality (Galerie Rudolfinum, Prague, 10. 2. – 24. 4. 2005. Curators Vanda Skalova, Tomas Pospiszyl). 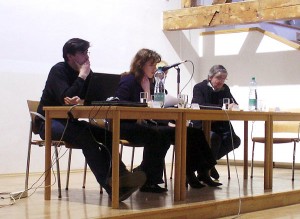 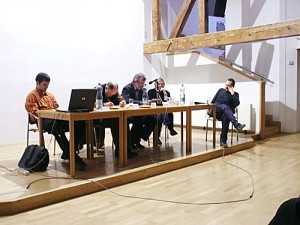 The aim of this seminar will be to contribute to an assessment of artistic outsiderism, of which an illustrative example is the figure of Alen Divis as a lone and uncategorizable legend of Czech 20th century art history. The theme chosen as the main discussion point of the seminar in this context was “parallel history”, which will reflect, in its wider context, the existential character of the fates of the artistic personalities of the late 1840s and early 50s, whose attitudes are only now being fully appreciated after years of compulsory neglect. 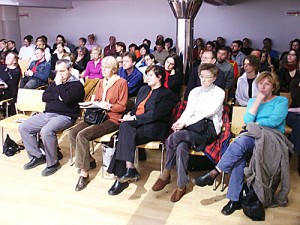 View to the audience

In the context of the subsequent discussion, Jiri Sevcik, Jaromir Zemina and Dagmar Svatosova, Eva Kratka, David Kulhanek and others will speak Vanda Skalova: Alen Divis – the myth and the reality of Autobiography, biography, genesis of the legend of the “artist-loner” and reality.
The contribution should cast light on the life and work of Alen Divis – an artist in whose life and work close associations are traditionally perceived – in the context of the “anecdotes” of his contemporaries. The author here attempts to demarcate the level of self-stylisation of the artist, his literary biography or story and its reflection in interpretations of the artist’s work.

Tomas Pospiszyl: Alen Divis and the world context of his work
For Czech art history, Alen Divis carries the label of an uncategorizable individual, who, however, anticipated the most varied world tendencies in painting, such as Art Brut and even Informel. Does Alen Divis really belong more to the context of world art than domestic art? Can his work be compared to that of artists such as Jean Dubuffet, Jean Fautrier or Wols?

Hana Rousova: Alen Divis and Pavel Kropacek – fates
In the documentary inheritance of Pavel Kropacek, among unpublished art history texts, is to be found a file titled Unwelcome Frankness – Heretic Notes. It contains two dialogues conceived as essays that are undated but in all likelihood emerged around 1940. The first is titled Live Dog and carries the motto “Better to be a live dog than a dead lion”. The second is called “Interviews”. The “live dog” model concerns human existence, ironising a verbal play on death and is in principle antimoralist. Kropacek’s blasphemic rejection of sacred standards, which in the Interview dialogues go as far as casting doubt on traditional responsibilities in interpersonal relationships, have on the one hand expressly existential characteristics, and on the other hand reflect the urgency of such questions during the period of Nazi occupation. At the root of the contribution is a comparison between Kropacek’s relationship to “heroism” and the attitudes of a number of other protagonists of the culture of the time towards this concept and also their concrete behaviour in constrained life situations.

Viktor Slajchrt: Alen Divis – story, legend, work – from the point of view of a journalist
– The problematic relationship between life and journalism. Some conflicts between serving the public, serving national culture and serving the interests of the moment. Interpretation or slogan? Criticism or propagation? The deceptiveness of objectivity and subjectivity, exaggerated didactic and the ignorance of the issue of art amongst representatives of the ordinary press.
– The journalistically attractive theme of Alen Divis. An extraordinary story from the recent past that allows for a journalistic penetration into large-scale history. Impressive parallels with ancient and modern legends, from magnificent heroes or their quests in search of adventure, through saints and martyrs to bohemian artists, poets maudits, modern hermits and tramps. Colourful anecdotes in the background of individual pictures. The work of art as a story.

Anna Pravdova: The 20s, 30s and 40s between Paris and Prague
Am I not now too much of a Frenchman for these cowering Czech heads? (F. Kupka to the Rector of AVU)
One of the chief links between the stipend students of Prague’s Fine Art Academy and the wider circle of Czech artists in Paris and with French culture was Frantisek Kupka, who took charge of them in 1923 and continued to do so till 1939 and, while his health allowed, lectured them on French civilization among other things. A range of Czech artists later stayed in Paris, even during WWII, where very varied fates awaited them – among the occupants of the House of Czechoslovak Culture, later arrested, was for example Edita Hirschova, a member of the illegal Surrealist group, who was deported in June 1942 to Auschwitz, or painters who joined the French resistance…

Tomas Winter: The national myth versus social realism: Divis, Filla, Fulla
In the late 1940s and early 50s, Alen Divis, Emil Filla and Ludovit Fulla found themselves under the negative pressure of official ideology. At the time, they were processing themes connected with the national myth: Divis was illustrating Erben’s collection of ballads “Bouquet”, Filla and Fulla were dealing with the themes of outlaw songs. This contribution confronts these works with the concept of myth as reflected in both interpretations of Erben’s poetry (Roman Jakobson, Jan Mukarovsky, Vojtech Jirat) and in general philosophical considerations (Ernst Cassirer, Roland Barthes, Mircea Eliade). It proposes the question as to whether the mythical accent, supported by Filla and Fulla in their tendency towards folk art, was not indeed an expressive alternative form of opposition to social realism.