2004-2005 / Project for the exhibition Algorithmic Revolution. On the History of Interactive Art, ZKM, Karlsruhe, 31. 10. 2004 – End of 2005, Federico Díaz, E-area and VVP AVU
Interactive installation by E-area team on the important international exhibition in the Center of Art and Media in Karlsruhe, Germany. The first ever display of a new project of Federico Díaz and his creative team E-area, which is based on the content of the English translation of the anthology Czech Art 1938 – 1989 will be shown at the exhibitionAlgorithmic Revolution at the Centre for Art and Media in Karlsruhe. Sembion 1.1.2 is an interactive installation, which generates forms out of texts, namely from the database, which was derived from the content of our anthology. The text has been morphologically and syntactically analyzed in a computer program into the form of a dictionary (the words) and into the list of signs (the letters), also according to the frequency of its use. In the installation, one can further manipulate with the text and create the new combinations and sense. Each of the visitors can activate by his or her motion, touch, voice or colour impulse the new configuration of the text and, in the meantime, to modulate analogical 3D form and the sound equivalent. 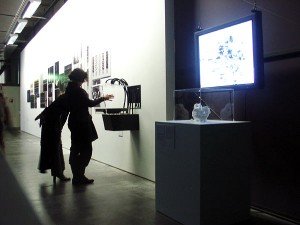 Also the next project is being prepared in the cooperation of the Research Centre and the E-area team, functions on the same principles. It is based on the text written by the Czech artist Karel Malich. It will be a part of the project of documentation, reactualiation and reinterpretation of the work by this artist. This project will be included to the GRAVITY project supported by Culture 2000, in which the Research Centre takes part. 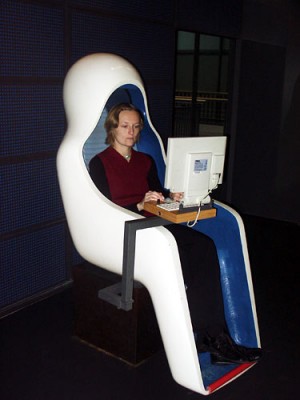 Sembion 1.1.2 is generating interactive forms based on semantic analysis of texts. It is searching for texts on Internet and it is using selected texts from its internal database. It is possible to connect Sembion with voice-recognition module to make three layers of database, internet text and visitor’s voice. All of them can be visible on the screen. Sembion is a text translated to the n-dimensional liquid forms.

All inputs are transformed into n-dimensional liquid architectures based on “metablobs”. Visitors can play with Sembion according to their intuition. Sembion is a tool for intuitive and interactive design of architecture- sublightecture.

In 1994 we started with modeling of interactive objects in 3D environment Metablobs. In Explore software (TDI company) first liquid forms came into being. People working on Silicon Graphics computers have started to perceive themselves as a group, which was later called E-area lab. During 2004 we are continuing in the Sembion project.

We are developing the system, which should be combined with sensors detecting light, movement, sound, words, temperature, radio waves, humidity, a chemical composition of air, Internet data and human emotions. Sensors are elongated human senses. Subliminal impulses for generation of Sembion should be ultra- and infrasounds, processes inside the computer and information pollution. Digital technologies are able to pass these informations over to us and visualize them. Data are translated to the code of binary sperms, which are used by HCCI learning self-generating anorganism. These forms and objects represent social structures, our thoughts, emotions and essence of biourbanism. It is inter-connected with matrix that is not accessible to human senses. We call this process the sublightecture.

Observing Sembion is like reading a n-dimensional text. Visitors can overview the whole text in one single moment or they are able to zoom inside. Granular synthesis is a zoom to the audibility border of a single letter. Each letter has its own frequency found by frequency analysis. This frequency is different for diverse visitors. Voice recognition is tuned by specific sentence to each visitor and Sembion forms starts it’s a new shape.

Next step for Sembion will be the generation of Sublightecture with its own interface on www.sembion.net. Here the binary forum of shapes should evolve; the individual forms of sounds and texts should be saved for generating Sembion’s forms. E-area is a think tank, an art group and in Czech Republic unique media laboratory. From 1994 it has been naturally growing and helping to develop area of the interactive media in the visual art field.

E-area is consistently working on humanizing technologies and presenting them in a natural way. Therefore everybody can intuitively and without any technical barriers communicate with the installations although the softwares and technologies are highly sophisticated.
E-area projects are carried out with the support of Silicon Graphics, Accenture, Intel, 3M, Global Telecomunication Systems, Electricity de France, United Parcel Servise and also with support of organisations like Mairie de Paris, Paris Musee, Royal Institute of British Architecture or Czech Ministry of Culture, School of Social Studies at Masaryk University in Brno and Research Centre – Academy of Fine Arts in Prague.