Cooperation and other projects 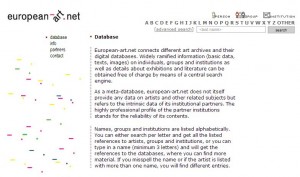 European-art.net was founded to feature a wide range of artistic production in Europe. European-art.net provides information on artists, their activities, presentations in museums or galleries as well as photos and texts. It was initiated by a co-operation between ‘basis wien – Kunst, Information und Archiv’ in Vienna and the art magazine Kunst-Bulletin in Zurich within the project VEKTOR – European Contemporary Art archives’ that is carried out between 2000 and 2003 with the support of the European Commission in the framework of the project ‘Culture 2000’.

European-art.net connects different archives and their digital databases that contain material of contemporary art through one search engine. It is not a simple link-list, though, but a technically advanced search engine that features the results of European art databases, also of databases that have no Internet-Interface by themselves. The network of partners will be growing over the next year.

In 2002, there has been established a new archive of contemporary Czech art since 1989 at VVP AVU, consisting of extended portfolios of the selected artists and texts as well as photo and video archive. Part of the project is an Internet database of the contemporary Czech artists – called i-datum, which is going to be on-line during the first half of 2003. This new on-line project will be connected to the web-system European-art net in 2003 and will enlarge its database of European art with Czech artists.

A project connecting by joint thematic problems six research institutions from East and West Europe dedicated to the study of the theory and history of art, related humanities, and theology.

GRAVITY. Art Religion Science
An international cooperation project on the topic of gravity.
Sponsored by the European Union in the Framework of Culture 2000

The interdisciplinary project “Gravity/Weightlessness” consists of the co-operation of six research institutions from Eastern and Western Europe focused on the theoretical studies and history of art, related humanity disciplines and theology. The project concerns the shared theme “gravitation / weightlessness” and its reflexes in the individual cultural areas. The aim is above all to bring this phenomenon to the public’s attention and to point out its thematic relevance in the areas of contemporary art, science and theology as well as history.

The international project ” Gravity/Weightlessness ” will include an interdisciplinary and supranational discussion forum in which current possibilities of the designated iconographic themes in the aforementioned areas will be newly opened and examined. The three-year project will also consist of international exhibitions, public symposiums accompanied by publications and the installation of Internet pages with possibilities for a discussion forum between the individual partners of the project, in which the separate research results of the individual institutions will be published. The release of a CD-Rom planned in the project’s concluding phase will then bring about a comprehensive evaluation of the research work.

In addition to the main organisers, other partners have been asked to join in the project – Kulturwissenschaftliches Institut der Berliner Humboldt Universität, Berlin (D) and the magazine Springerin, Wien (AT).

Project of VVP AVU:
VVP AVU is participating with its own specific project, which transforms the general brief into a concrete situation. Gravitation as a physical phenomenon and as a transferred attribute of terrestrial or bodily weight acts in counter to the phenomenon of weightlesness. Both of these phenomena have been reflected in human experience since time immemorial. In recent centuries, and particularly in the 20th century, they were fundamentally reformulated in connection with scientific discovery and technological development. VVP AVU decided to connect to a project of the important Czech artist Karel Malich, who works with the transposition of psychophysical experiences into the conceptually dematerialized situation of the work of art. “Gravity/Weightlessness. Karel Malich” is a specific project that puts the artist’s work in a wider context and at the same time contributes to its further critical evaluation and interpretation.

2002–2003/ EAST ART MAP. A (Re)construction of the History of Contemporary Art in Eastern Europe

This project was conducted by the groups IRWIN and NEW MOMENT, Slovenia.
Czech section by Jiri Sevcik and the AVU Research Centre.
A project comprehensively mapping art history in Eastern Europe from its own perspective and in comparison with the West. 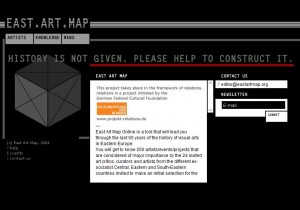 EAST ART MAP (EAM) is one of the first projects comprehensively mapping art history in Eastern Europe from its own perspective and in comparison with the West. The project creators developed a unifying basic scheme in which various artists, extracted from their specific national backgrounds and classified in a shared context (East Art), work side by side. This mapping of art in the East, with its schematic line of possible relations, does not propose to be a single, ultimate and unalterable truth. Instead, it seeks polemical responses and a platform for further discussion.

Similar attempts to categorise art at present are considered to be inadequate. Nevertheless, it is an interesting paradox that such a scheme, discovered as early as during the Classicist period, has remained one of the possible means of orientation in the field of art.

In carrying out the EAST ART MAP project, 20 art critics, curators and artist from various countries were invited to compile a list of ten of the most significant art projects conducted over the past 50 years in the countries of Eastern Europe.

EAM is divided into 27 sections – the time periods are key (from the 1920s to 1964) – and some of the sections are divided into a further two parts (a,b). The artwork / project / period cultural phenomenon is always presented through photographs and a short text. Thus a mosaic of possible relations is created, crossing through an incongruous culture and geographic entity, which shared a certain fait during a certain historical epoch. The creators of the project are intentionally working with a paradox. Very few people from post-communist countries (especially in Central Europe or the Baltic Republics) would proudly declare that they belong “to the East”. Nevertheless, and especially through the West’s eyes, the post-communist world stands out as its own cultural identity. A similar struggle for cultural independence from ideological structures has taken place in all of the individual countries and attempts at parallel solutions to similar problems as in the West have appeared. As a (re)construction of the history of contemporary art in Eastern Europe, EAM is a generalisation – though one which is decisively more venturesome and progressive than simplifying.

The IRWIN group and New Moment association in Slovenia are responsible for the EAM. Next year an EAM CD-ROM will also be released. Jana and Jiri Sevcik selected the following as key moments for Czech art during the period of the Second World War to present: Ladislav Zak and his later avant-garde concept of new architecture, Egon Bondy (Roman 2000), Jiri Kolar, Zdenek Sykora, Karel Malich, Milan Knizak, Ivan M. Jirous (Report on the Third Czech Musical Revival), Jiri David, Jiri Kovanda and the group Pode Bal.

An International Research Project – Database Construction and Contemporary Art.
Sponsored by the European Union in the Framework of Culture 2000 The aim of the project was to digitalise and establish mutually integrated archives from variously structured institutions. The main goal was to achieve an internationally valid standard of archive databases so that all hitherto unavailable data is accessible on-line. AIT (Applied Information Technology Research Corporation, Graz) created a suitable web database system for the project.

After the end of the project was as the main goal published the book Book Gegenwart dokumentieren / Archiving The Present, basis wien, Vienna 2006. 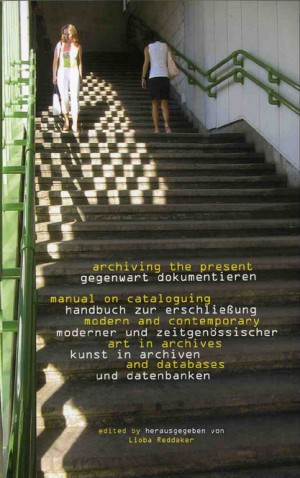 Cover of the book

Documentation centre of Austrian contemporary art with archive and an extensive on-line database basis wien, Kunst, Information, Archiv published at the end of 2006 a publication Gegenwart dokumentieren / Archiving The Present, ed. Lioba Reddeker, basis wien, Wien 2006. The book is a result of the project VEKTOR – European Contemporary Art Archives, supported in the framework of the EU programmes of Culture 2000 in years 2000-2003.

The German English manual focuses the archives of contemporary art, and has been conceived as a theoretical and practical guide for the thematic structuring of archive systems and databases. This book is an introduction to the current status of scientific discussions on standardised data processing, legal foundations and technological environments. An important part added to this handbook is an extensive reference survey on international art archives and databases with a special focus on Central Eastern European institutions. The chapter concerning archives of contemporary art in the Czech republic was prepared by VVP AVU.