Peter Weibel “The Impact of Information Tools: From Simulation to Stimulation”

30. April 2007, 11 am., Academy of Fine Arts Prague, hall, U Akademie 4, Praha 7
introduced by Jiří Ševčík, vicechancellor of AVU and director of VVP AVU

Prof. Peter Weibel in his lecture with the title The Impact of Information Tools: From Simulation to Stimulation introduces his thesis on the new material revolution. 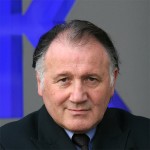 Prof. Peter Weibel, born in Odessa in 1944, he studied literature, medicine, logic, philosophy and film in Paris and Vienna. He became a central figure in European media art on account of his various activities as artist, media theorist and curator. Since 1984 he is professor at the University of Applied Arts Vienna, from 1984 to 1989 he was head of the digital arts laboratory at the Media Department of New York University in Buffalo, and in 1989 he founded the Institute of New Media at the Städelschule in Frankfurt-on-Main. Between 1986 and 1995, he was in charge of the Ars Electronica in Linz as artistic consultant and later artistic director and commissioned the Austrian pavilions at the Venice Biennale from 1993 to 1999. From 1993 to the present he is curator at the Neue Galerie Graz and since January 1999 Chairman and CEO of the ZKM | Center for Art and Media, Karlsruhe.

In 2007 he was awarded the Honorary Doctorate by the University of Art and Design Helsinki.

The solo exhibition of Peter Weibel in 2004 in the Gallery of the Austrian Culture Forum in Prague was organised in the cooperation with VVP AVU.