The 16th issue of The Notebook for Art, Theory and Related Zones contains three texts examining the different forms the avant-garde took during the 1950s and 60s, a short essay on the philosophical interpretation of photography, and a review of a publication on architecture. In an article based on her talk at last year’s conference organised by the AVU Academic Research Centre entitled “Between creation and production. Transformations in the artistic process”, Hana Buddeus compares different approaches to the photographic documentation of happenings, emphasising the significance of its legendary precursors Jackson Pollock and Vladimír Boudník. Having studied Jiří Kolář’s correspondence and other archival sources, Tomáš Pospiszyl untangles the web of contacts between Czechoslovak artists and the Fluxus movement in the 1960s. The winner of the first year of the competition for best article by a student, Lenka Brabcová Kršiaková, examines the work of Daniel Buren using a conceptual framework taken from Miroslav Petříček’s book Thinking by the Image. In a text entitled “François Laruelle on Photography”, Tomáš Koblížek responds to Laruelle’s book The Concept of Non-Photography, whose thesis he confronts with the literary procedures of Alain Robbe-Grillet. This edition of the Notebook ends with a review by Jana Pavlová of an anthology edited by Monika Mitášová entitled Oxymoron and Pleonasm II.

This essay follows on from Pavlína Morganová’s article “The Meaning of the Word Is Its Use: Jiří Kolář – Yoko Ono”, published in the last issue of this journal, as well as following on from other articles concerned with the relationship between Czechoslovak artists and members of the international neo-avantgarde associated with the Fluxus group. Based on new archival research, the essay traces and details the direct contacts between the Fluxus founder George Maciunas and Czech artists and critics in the second half of the 1960s. It compares the differences in the attitudes of Jiří Kolář and Milan Knížák towards the international art scene. Whereas Kolář was cautious in his treatment of invitations for collaboration from abroad and did not leave the field of experimental literature, Knížák – though critical of some aspects of the Fluxus movement – easily identified with the general goals of the global neo-avantgarde and took active part in it.

The Photographic Conditions of Happenin

In the art world, the upsurge of interest in photography has always been a corollary of the shift in emphasis from the art object to the process or perhaps to the activation of the viewer. Once the artwork itself had been withdrawn in favour of the action, photography began to play the important role of the mediator. The phrase ‘photographic conditions’ was coined by Judith Rodenbeck, in her book on Allan Kaprow, in connection with the happening and its inclusion in art history. Following on from her concept, this article compares Kaprow and his approach to photographic documentation with the the work of Czechs, specifically Milan Knížák, and points out the difference in the models of adopting predecessors. Whereas Kaprow alludes to Jackson Pollock, Knížák denies that the happening had any forerunners, and it is only the art historians who see Vladimír Boudník in this role. Both Pollock and Boudník entered art history as legendary figures whose existence is attested to in photographs capturing them at work. These photographic representations correspond to the ideal of the solitary creator – the modernist genius – while establishing the myth of the artist entering the space and a dialogue with the viewer. It is therefore supposed that in Boudník (as in Pollock, albeit based on a different trajectory of development) a certain stage of conditions existed which enabled the subsequent evolution and the inclusion of the happening into art history by means of photographic documentation. The retrograde institutionalization (and commercialization) of the happening through documentary photography appears not to have been an incidental paradox; rather it is fair to see it as an obvious consequence of the fact that photography has helped to connect this type of creation with the realm of visual art.

Thinking in Images in Daniel Buren

In this article some of the ideas and concepts that the Czech contemporary philosopher Miroslav Petříček discusses in his book Myšlení obrazem (Thinking in images, 2009) are applied to the work of the French artist Daniel Buren. In the first part of the article, Buren’s art is briefly characterized. The article then deals with the “imagery of the image” in relation to Buren’s work. Imagery of the image in visual art is what turns colour, lines, and planes into an image. It is specific to art and cannot be translated into any other medium, not even language. Petříček suggests that the “imagery of the image” is characterized by several features, including the principle of formation – a system that manifests itself in the way a work is formed. Other features of the “imagery of the image” which are addressed here are perceiving and conceiving reality and understanding that works of art are images projecting different slices of reality. The second part of the article is predominantly focused on the concept of frames, frameworks, borders and limits, and how they relate to Buren’s work. The fact that art is framed by a theoretical framework is discussed in connection with this. Other topics addressed here and applied to Buren’s work in the second part of the article include borders and limits in art, the liquidity of shape, and the comprehensibility given by a work’s framing.

Drawing a comparison with Alain Robbe-Grillet’s approach to literature, this essay comments on François Laruelle’s theory of photography. Both authors emphasize implicit, non-objective aspects of the particular medium they discuss: Robbe-Grillet refers to the subjectivity or the ‘subjective gaze’ which is ubiquitous in his novels; Laruelle talks of the power of seeing which is revealed in photography. Nevertheless, the two approaches are significantly different from each other. Whereas Robbe- Grillet sees subjectivity as intentionally bound to its object, Laruelle considers the power of seeing to be condensed in itself. According to Laruelle, photography presents a special dimension of seeing which is not – strictly speaking – related to objects. 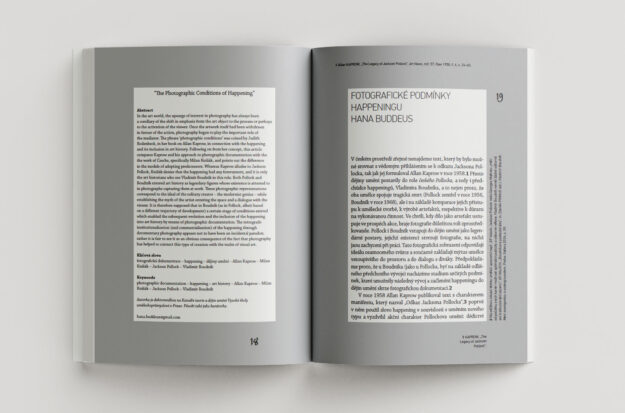