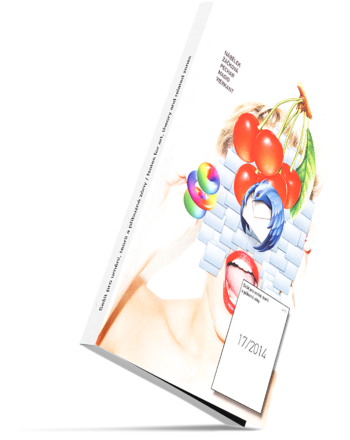 The 17th issue of The Notebook for Art, Theory and Related Zones examines two major themes: the concept of the experiment, and post-internet art. The first section comprises two original essays and an interview based on papers presented at the conference “Boundaries of the Experiment” at UMPRUM. The first theoretical essay by Kamil Nábělek analyses the term “experiment” and the different ways it is applied in science and art. The concept of experimentation in architecture and urban planning is examined by Markéta Žáčková in a case study devoted to the activities of the Research Institute for Building and Architecture. Jiří Pechar addresses the possibilities of experimentation in literature, especially in respect of the French nouveau roman and experimental poetry of the 1960s, in an interview with Johana Lomová and Jan Wollner, organisers of the conference referred to above. The topic of post-internet art is examined in two texts. Václav Magid places the current debate around the term “post-internet” within the interpretative framework of critical theory. The last text of this issue is a translation of a text by the artist Artie Vierkant called “The Image Object Post-Internet”, written in 2010, which could be regarded as a kind of manifesto of this artistic trend.

‘Although There Was a Plan…’: The Research Institute for Building and Architecture and the Experimental Housing Construction in the Late Fifties and Early Sixties

This contribution discusses experimental tendencies in building and architecture in the late 1950s and early 1960s. It focuses particularly on the mass housing that was meant to have been based on work of the Research Institute for Building and Architecture (VÚVA). At that time, the Institute was commissioned to provide the theoretical basis for the experimental construction which should have later been transferred into standardization and introduced into production. In VÚVA work, the term “experiment” was interpreted very pragmatically in its elementary meaning – namely, the verification of the building and technological processes. The results of their research were meant to determine later work in the form of experimental projects and construction. The questionable outcomes of its practice, however, provide evidence of an essential discrepancy between the research and reality of architecture and urban planning.

On Experiment in Literatura: An Interview with Jiří Pechar

In this interview the literary critic and philosopher Jiří Pechar recounts his experiences with experimental forms of literature as a critic, translator, and author.

Echoes of the Wrong Laughter: Post-Internet Art and the Culture Industry

The essay focuses on a new art movement called “Post-Internet” and its approach to the Culture Industry. In the first parts of the article the author introduces the reader to the main facts about the so-called “Post-Internet Condition”, in which the Internet becomes a banal aspect of our everyday lives, and about “Post-Internet Art” as a response to this overall change in the cultural climate. In the following sections the author examines the ambitions of Post-Internet Art with regard to the Culture Industry, comparing and contrasting the conceptual apparatus of Critical Theory with a current political tendency known as Accelerationism. The analysis of Post-Internet Art as represented by the DIS collective leads the author to conclude that this recent movement reinforces the ubiquitous power of the Culture Industry while harmlessly parodying its forms and strategies. The effect is the “wrong laughter”, which “echoes the inescapability of power”.

This is a Czech translation of an essay by the New York-based artist Artie Vierkant. The essay is “an extended statement of artistic purpose and ctirique of our contemporary relation to objects and images in Post-Internet culture”, understood as culture that has become fully saturated with digital and online media. According to Vierkant, in the Post-Internet condition art objects lack representational and medium fixity, and as image replication, alteration, and proliferation become accessible to virtually anyone, ubiquitous authorship contests the difference between art viewers and art producers.