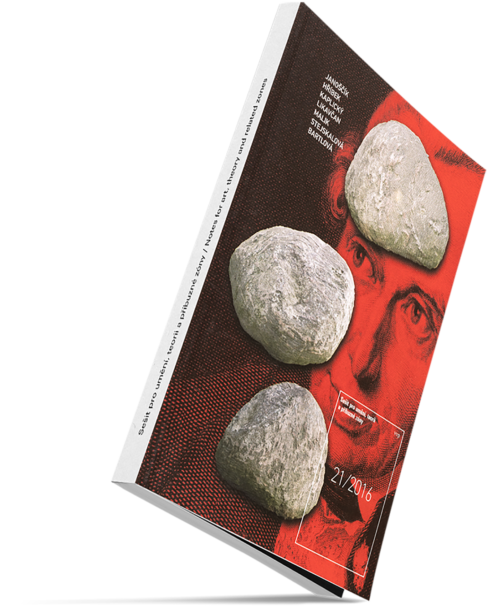 The twenty-first edition of the Notebook For Art, Theory and Related Zones is devoted to “Speculation and Art”. It examines the aesthetic and critical implications of what is known as the speculative turn in continental philosophy, represented by currents such as speculative realism, new materialism, objectively oriented ontology and accelerationism. The essays forming the backbone of this edition are the first specialist publications in Czech. They are not limited to documenting the basic trends, but develop these ideas in original ways.
In his introductory essay, Václav Janoščík uses the metaphor of the map and the territory from the novel of that name by Michel Houellebecq to examine the philosophy of Quentin Meillassoux and his demand that we leave our comfort zone for the “great outdoors” that lies beyond the boundaries of thinking and object. Tomáš Hříbek offers a critique of speculative realism and new materialism from the position of the analytical philosophical tradition and looks in detail at the ontology of Graham Harman and its implications for aesthetics. The contribution by Martin Kaplický compares Harman’s thinking with that of Alfred North Whitehead and examines in detail the status of aesthetics in the philosophical systems of both thinkers. Lukáš Likavčan draws on the term “xenorationality” to enrich our understanding of the place of aesthetics within the ideological framework of speculative realism. He looks at the problematic of stepping beyond the boundary of anthropocentrism, which on the one hand is creating an ecological crisis and on the other the development of artificial intelligence.
These four original essays are joined by the translation of a text by Suhail Malik that promotes the liberation of artistic creativity from the correlationism anchored in aesthetic experience, a demand that leads inexorably to the need to destroy contemporary art. This thematic block includes a review by Tereza Stejskalová of the anthology Object, published by Václav Janoščík last year on the occasion of the exhibition of the same name at the Kvalitář Gallery. In a second review Milena Bartlová examines the question of the pathos of the link between research activities with the existential situation of the researcher in the book by Josef Vojvodík and Marie Langerová Pathos in Czech Art, Poetry and Aesthetics in the 1940s.

The Territory and the Map: Speculative Thinking and the Problem of the ‘Great Outdoors’

Speculative realism remains a highly discussed and indeed contested tendency in contemporary thought. Rather than a direct confrontation between its various strands and the post-Kantian or correlationist philosophy, the present article intends to provide a more nuanced and open reading of some of its elements in order to foster dialogue rather than extrapolation. I draw on the work of Quentin Meillassoux, namely on his inaugural essay After Finitude as well as on an extension of his attack on correlationism on to subjectalism, confirming his more explicit engagement with poststructuralism. In such course I aim to show not only some critical or controversial aspects of his theory, but also its point of conjunction with the critical tradition in philosophy. The whole text is intertwined with an exposition of Michel Houellebecq’s The Map and the Territory to illustrate the potential of literary fiction to contribute to philosophy, namely in respect to its ambition to reach out to the “Great Outdoors” of a world independent from our anthropocentric imports.

Recent years have seen the ascendance of a new trend in continental philosophy called “the speculative turn”, “speculative realism”, “continental materialism”, or “object-oriented ontology” (OOO). I focus on the work of one of the proponents of this new trend, Graham Harman, in particular his recent attempt to extend his “object-oriented” approach to art and aesthetics. In part 1, I start with a brief characterization of the new trend in terms of the shared opposition of all its proponents to what Quentin Meillassoux calls “correlationism”, which is, roughly, anti-realism. However, there is a split among the new realists as to whether they accept materialism. As I explain in an exposition of OOO in part 2, Harman does not accept it, but he has an inadequate view of materialism. This affects his defense of the Greenbergian formalism as an alternative to materialism, which I outline in part 3. I believe Harman’s favorite formalism is quite unfit for understanding the art of the period that interests him, that is, post-1960s art. I close with a few notes on an alternative, namely a certain branch of materialism which, however, has as its source psychoanalysis rather than the metaphysical doctrine which usually goes by this name.

The main aim of the article is to compare Alfred North Whitehead’s speculative philosophy and Graham Harman’s object-oriented ontology, and to consider Harman’s claim that Whitehead can be described as an object-oriented philosopher. The text is divided into two parts. The first part introduces Whitehead’s philosophical method of imaginative generalization, and shows how this method leads Whitehead to extend the meaning of the traditional philosophical terms behind their established use. In this method, metaphor is seen as an indispensable tool of philosophy. This extension of the terms and Whitehead’s explanatory scheme is highly appreciated by Harman. Harman sees this extension as one of the rare examples of overcoming the so-called correlationism and relates it to his own model of objectoriented ontology. It is demonstrated that however similar these two philosophical schemes may seem, they differ radically in their main aim. While Whitehead looks for a scheme which could successfully interlink final and efficient causality, Harman is trying to develop a theory of objects based on a new version of formal causality. The second part of the article is devoted to the role of aesthetics and art theory in the schemes of both philosophers. In both cases, aesthetics is located at the base of the whole philosophical system. In Harman’s case, the key aesthetic notion is allure, which is described as a way to overcome the crust of sensual objects and meet the hidden nonrelational real object, while Whitehead supports the notion of beauty conceived as the process of harmonization of diverse data. The key problems of Harman’s aesthetic theory are suggested, along with the possible aid of Whitehead’s solutio.

Aesthetics, Ecology and Google AI: A Preliminary Inquiry into Xenorationality

This paper presents a blueprint for a new aesthetic theory which is informed by recent developments in the philosophy of speculative realism on the one hand, and capable of addressing issues arising from the ecological crisis and the emergence of artificial intelligence on the other. The primary point of departure here is the philosophy of Quentin Meillassoux and Immanuel Kant. Aesthetics is understood as a speculative investigation of the realm of possible assemblages (or compositions) of entities. Such assemblages manifest xenorationality – that is, non-human principles of association and composition. Drawing on the work of Alfred North Whitehead and Steven Shaviro, I define rationality as the investment of external objects into the human mind, rather than an autonomous subjective faculty. General genetics of xenorationality uncovers the original exteriority and ancestrality of rational principles vis-à-vis the human subject. Furthermore, xenorational aesthetics is demonstrated on the example of Google AI AlphaGo program’s surprising move in the 2nd match against the world’s top Go player, Lee Sedol. This move was described by viewers as “inhuman” yet “beautiful”, and it will be argued that it was a manifestation of AlphaGo’s xenorationality. Lastly, the argument can be generalised to planetary ecosystem processes, leading to an assessment of the aesthetic experience of xenorationality in the process of cognitive mapping as the major driver of socio-political practices in the Anthropocene.

This is a Czech translation of an essay by the London-based critic and theorist Suhail Malik. The essay draws on the rationalist strand of speculative realism to claim that contemporary art – so long as it remains dependent on the subject of aesthetic experience – remains a branch of correlationism as defined by Quentin Meillassoux. The meaning and value of contemporary art springs from the mutual constitution of the art object and the perceiving subject in the event of aesthetic experience. This process presupposes and further reproduces the principles of correlationism. Any thorough-going realism that opposes correlationism must undermine the very foundations of contemporary art and by so doing hint at the possibility of another art practice. Such an art would not be co-constituted by its audience; instead, it would be a rational practice outside of the realm of aesthetics. 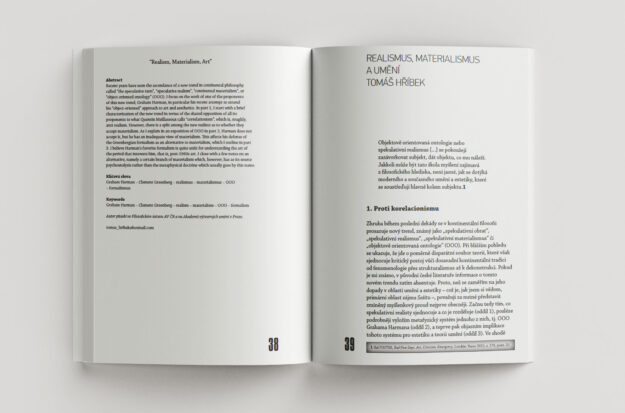 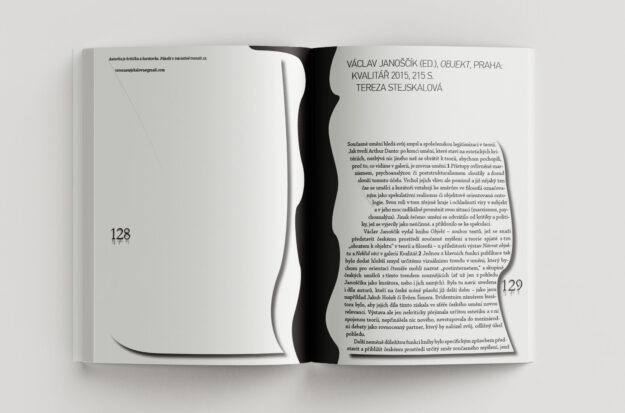 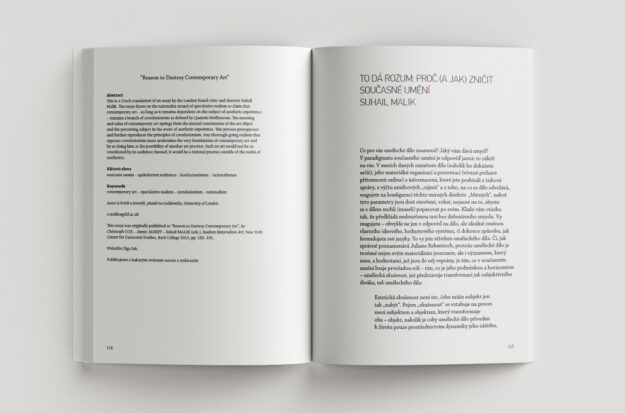