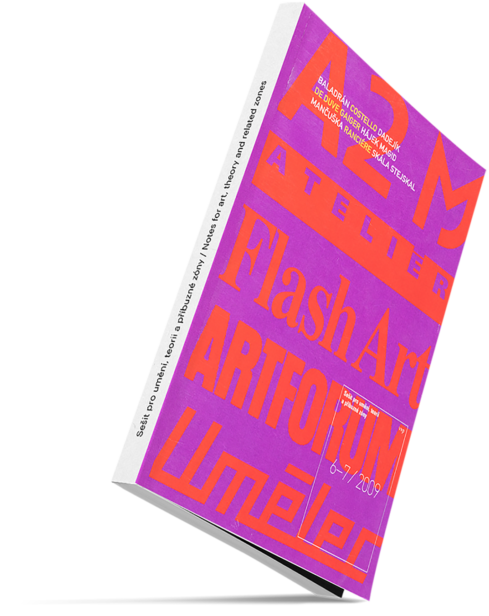 The double issue 6-7 of Notebook focuses on aesthetics and its complicated relationship to contemporary visual art and culture in general. Aesthetics professes the conviction that there exists a specific mode of a man’s relationship to the world that artists strive to mediate. Expressions such as detachment, beauty, purposiveness without a purpose, aesthetic experience and aesthetic judgement have been traditionally linked to this relationship. Over the past fifty years these terms have been exposed to harsh criticism in the area of art theory. The history of Western art, as it were, charged aesthetic theory with being obsolete. But an unavoidable choice awaited art theory, which wanted to free itself from aesthetics. either defend the existence of its subject in radically new terms, or resign itself to the fact that its subject is something specific that requires its own category. Both possibilities offered both promises and pitfalls. Attempts at giving new responses to „What is art?“ proved extremely unsatisfactory. And the increasingly apparent limitations of such responses led some to go back and rethink the configuration of modern art and the aesthetics line of discourse in which this configuration was formulated. The intellectual frame of modernist art is actually created by modern aesthetics. Therefore, if we want to understand what it means to be modern in art and whether it is good or bad, we must consider the vocabulary that is created in thinking through problems that may seem to us today to be beyond the realm of relevance. That is, at least the view shared by most of the authors represented in this issue of Notebook.

The Problem of Aesthetics in Contemporary Art

The main focus of the article is a deliberation on two ways of thinking about contemporary art. The first level is the argument over the aesthetic nature of art, which mainly concerns a transition from traditional art forms to the artistic movements of the past half-century collectively designated as neo-avant-garde. The second related level involves searching for possible answers to the question of the relationship between (art) theory and (artistic) practice. The core of the text is an attempt at a restrained defence of the aesthetic nature of art, be it classical, avantgarde or neo-avant-garde. Deduced from the posited thesis are (1) individual arguments for the irreducibility of theory (of art) to (artistic) practice and vice-versa, and (2) one of the possible answers to the question of what is actually new in the neo-avant-garde.

Kant´s ´Free-Play´ in the Light of Minimal Art

Thierry de Duve engages in aesthetics terms with Robert Morris’s work from the late 1960s. He thus show that anti-aesthetic art remains part of modernist aesthetic discourse. He returns to Kant’s account of aesthetic experience in the Critique of Judgement and applies it to minimal and conceptual art. In particular, de Duve demonstrates empirically that Morris’s work illustrates how Kantian “free play” remains relevant to art hitherto characterized as antiformalist and anti-aesthetic.

Diarmuid Costello argues that aesthetics became marginalized in postmodern art largely due to the dominance of art critic and theorist Clement Greenberg. Costello discusses how Greenberg’s coupling of medium specificity with aesthetic quality, and his grounding of this in a limited reading of Kant, overdetermined subsequent art world conception of aesthetics. Costello investigates the historical conditions of this rejection and suggests how Kant’s theory of art might be used to retrieve aesthetics for contemporary debate.

Aesthetics is a Living Discipline. An Interview with Jason Gaiger

This interview supplements Jason Gaiger’s essay, “Dismantling the Frame: Site Specific Art and Aesthetic Autonomy”. In the interview Gaiger presents his view on the relationship between philosophy, art history and art theory, on the relevance of aesthetics for the interpretation of contemporary art. Gaiger also illuminates the key strategy and the conceptual framework chosen for writing his study.

This paper examines the assumptions underpinning one of the constitutive elements of the modern concept of art: the idea of aesthetic autonomy. Gaiger argues that the orientation of recent art practice towards what has come to be termed “site-specificity” is best understood as a progressive relinquishment of the principle of aesthetic autonomy. He developes this position through a close analysis of the work of Miwon Kwon. The paper is intended as a case-study that investigates the problematic relation between historical and philosophical enquiry.

The text is a critical introduction to the aesthetic deliberations of French philosopher Jacques Rancière. Since the 1990s this student of Louis Althusser has systematically published works on art and aesthetics that reflect his earlier study of the history of the French labour movement. His attempt at contemplating emancipation beyond the standard logic of the emancipating granting equality to the emancipated, a view that already contains a violation of equality, led him to study the birth of the modern aesthetic discourse on art. In Rancière’s opinion the aesthetic regime of art differs from others in that it revokes any hierarchical differentiation of roles and functions in the work of art. With his conception of an aesthetic regime of art, Rancière draws a line between both modernist and post-modernist interpretations of contemporary art. Nevertheless, his extension of aesthetics into the realm of politics is controversial and has its roots in a certain tension in Rancière’s methodology.

The Ignorant Schoolmaster was a meditation on the eccentric theory and the strange destiny of Joseph Jacotot, a French professor who, at the beginning of the nineteenth century, unsettled the academic world by asserting that an ignorant person could teach another ignorant person what he did not know himself, proclaiming the equality of intelligences, and calling for intellectual emancipation against the received wisdom concerning the instruction of the lower classes.

The Fate of the True Critic. Mass Media, Popular Culture, and the War of Criticism

The institute of criticism is relatively young – it doesn’t appear until the European Enlightenment and the Romantic era. In this period critics were responsible for introducing new aesthetic terms and arguments into practice. Along with other institutions (galleries, museums, cultural periodicals, art schools, etc.) they attempted in the new social climate to establish and secure artistic operations, whose position and role advanced markedly in conjunction with political and social changes. Argumentation for terms such as taste, kitsch, beauty and magnificence, autonomy and genius appeared. A free market of art opened, with the attendant merits and deficiencies. Critical discourse was gradually adopted by the sphere of popular production, where appraisal and the activity of “aesthetic judgement” began to play a role. New technical paintings, mass entertainment, commercial representations, etc. began to be viewed through the prism of these concepts. In this way art both opens up and shuts off to the general public. Certain terminology became public domain; it was simplified and transferred to the sphere of common communication. Today the quick assessments of “instant critics” fill the pages of film and television magazines; they are also applied in the areas of politics, sports, lifestyle, fashion, and elsewhere. We will search for the roots of this review mania in the original critical discourse and ask whether this inclination toward ranking, judging and grading wasn’t already prepared in advance (this tradition naturally reaches deeper – to paragon, artistic competitions, etc.).

Towards the Ideal Presentation in a Gallery Space. An Interview with Jiří Skála

On the basis of Skála’s own work, the interview reassesses aspects of conceptualism such as the rejection of the artefact, its replacement by the documentation and the exclusive standing of the text. An emphasis is placed on the specific nature of gallery space and on the inherent physicality of the works that are exhibited there.

I Don´t Have any Clear Ideas - Which is Why I am an Artist. An Interview with Zbyněk Baladrán

The interview attempts to pinpoint the artist’s position on the borderline of art and theory. The interview is based on Baladrán’s dual background of both an art history and art education. Theoretical and artistic discourses in this country are compared; the possibility of work on the border of the artistic and scientific disciplines is contemplated, and the differences between the methodologies of these fields are formulated.

My ambition is to reach understanding. An Interview with Ján Mančuška

The artist’s relationship to theory is considered from various perspectives. Attention is devoted to problems of contemporary art criticism and the functioning of the institutional system of art. 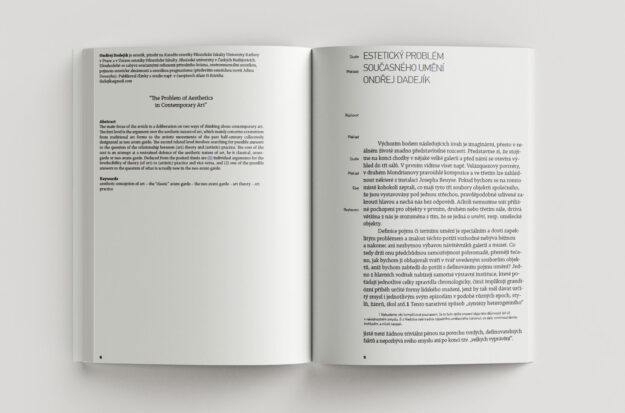 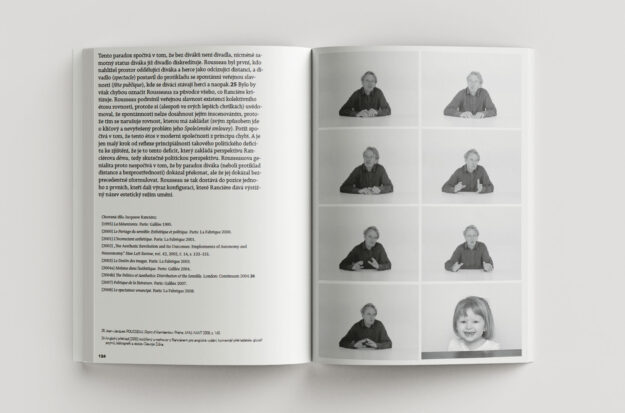