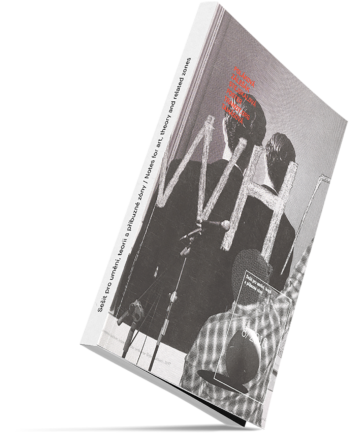 This issue features three original reviewed specialised studies. Sylva Poláková’s text focuses on the convergences of film and architecture that she follows, for instance, in works on the streets of Prague in recent years. In his study on „critical curatorship“ Jan Zálešák writes on the transformations of roles of the artist and of the curator in the era following institutional criticism. Tereza Stejskalová analyses the situation of three female artists and their departure from the art scene, as well as the attention that is given to it within this sphere. Her text refers to Hal Foster’s well known article „What’s Neo about the Neo Avant-Garde“, whose Czech translation immediately follows. A manifesto by the curators of this year’s Manifesta is printed as a document of contemporary art and curatorial practices. The issue concludes with a review of the exhibition Gender Check that was held at the beginning of this year at Vienna’s MUMOK.

The Convergence of Film and Architecture in the Streets of Prague

This article focuses on the change in status of several categories that have a share in shaping the present-day experience of the city – specifically, those on the borderline where public space, architecture, and film meet. The initial impetus was the need to revise definitions that, because of a number of factors, have become untenable. This is mainly because of the development of digital technologies that have become an important platform for highly varied kinds of convergence. Film itself in its digital form becomes a borderline area for the synergies of some highly varied practices. The fact that film is derived from many different spheres, together with its heterogeneous recurrence, leads us back to considering it as a multifarious and diffuse entity, with more than just one identity. Film has to be perceived as a particular element intertwined in a network that links the history of modern forms of entertainment, story-telling, the mass media, and the public sphere. Film as a digital image converges with architecture by making revitalizing interventions in already existing buildings, as well as in the process of design itself, through which it makes a radical contribution to the transformation of architectural practice and the expansion of its possibilities and functions. The question of the revitalization of the city closely touches on the matter of defining a public space that is subjected to the general trend of privatization and fragmentation. Faced with the task of generalization, scholars considering hybrid forms of public space and the still unstandardized convergence of architecture and film must start from a local basis. That is why this article too turns for its examples to the Prague of the past fifteen years.

Critical Art and the Curatorial in Precarious Times

Current discussions of the notions of critical curating or “the Curatorial” suggest that today’s curatorial practice aspires to take some of the credit for art making. Critical curating is focused both on the question of art institutions and exhibition formats and on a set of current topics, such as precarization, the post-Fordist economy, and globalization. There is an obvious proximity between critical curating and diverse forms of project-oriented art, yet there is an important difference that relates to the notion of artistic autonomy. The permanent threat of losing autonomy relates project-oriented art to the paradigm of avant-garde art, where the abolition of autonomy and the search for ways of merging art and life are the key questions. Project-oriented art suffers from the lack of specificity in a work that can be recognized as an artwork only within the context of a museum or gallery. And it is in such an institutional context that the critical curator may be tempted to aspire to authorial status. To be able to distinguish between the two positions – artist and curator – we may usefully employ the Foucauldian notion of “biopolitics”.

On Dropping Out in Contemporary Art: An Attempt at Analysis

This essay offers insight into the recent interest in art dropouts. It considers artists such as Lee Lozano, Charlotte Posenenske, and Laurie Parsons, their work, their rejection of art and the art world, and the recent rediscovery of their lives and oeuvres. It proposes to see such gestures of refusal in the light of the Avant-garde’s frustration with art’s autonomy and their desire to introduce new forms of social practice by means of art. Inspired by Hal Foster’s employment of Freudian Nachträglichkeit (deferred action), it perceives the recent interest in the art dropout as an occurrence in which it is possible to take cognizance of this figure for the first time. Further, the essay describes various projects (exhibitions and theoretical writing) that have undertaken to thematize or conceptualize this phenomenon and to consider it critically. The main thesis of the essay is that they operate through the logic of fetishistic denial (Verleugnung) by which the traumatic paradox of art’s autonomy is both recognized and denied.

What’s Neo about the Neo-Avant-Garde?

In this now classic 1994 article, Hal Foster challenges the German theorist Peter Bürger’s verdict on the so-called “neo-avant-gardes”, which was presented in Bürger’s immensely
influential Theory of the Avant-Garde (1974). According to Bürger, the neo-avant-garde trends since the end of the Second World War have betrayed the original avant-gardes’ efforts to destroy the autonomy of art; by re-imploying avant-garde strategies in an institutional setting of the artworld, they have stripped them of their critical potential. Foster regards Bürger’s conception of the neo-avant-gardes as schematic and reductive. He offers his own interpretation of the relation between the avant-gardes and their post-war reincarnations, which is based on the Freudian notion of deferred action.

The article “Constitution for Temporary Display” discusses the search for an exhibition strategy for tranzit.org, one of the curatorial teams participating in this year’s
Manifesta 8 – The European Biennial of Contemporary Art. It closely examines the possibilities of establishing rules for the regulation of relations between curators and artists during the preparation of an exhibition. The search for a “constitutional order” for their section at the Biennial led the tranzit.org curators to tackle the questions of freedom, law,
transparency, and participation. The article is published in English in the original exhibition catalogue. For publication in Czech, the authors have prepared a slightly altered version. The article is accompanied by the list of questions that are part of the Constitution for Temporary Display project. 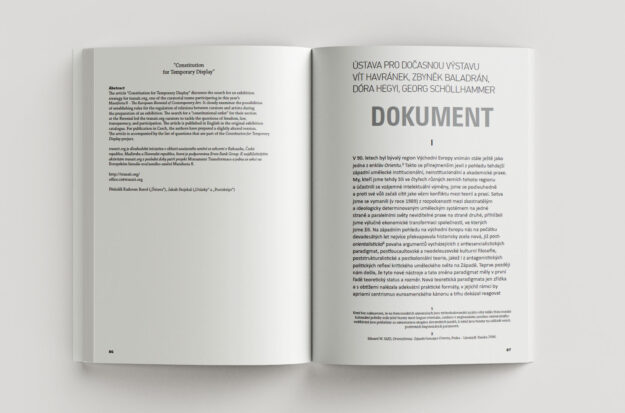